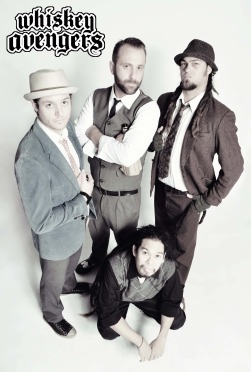 Out of the scum and smut peddlers that lurk in the allies of the music industries a
band of heroes has risen to fight decreasing record sales and mediocre musical trends brought upon by commercial monopolies who’s piss n’ dribble continues to trickle down on our DJ’s, promoters, venues, and radio stations. We live in a world of musical crisis and these noble musicians are here to serve and protect your right to earn a living and enjoy musical freedom. Northern California natives the Whiskey Avengers have been spilling their infectious music out of the local dives and on to the streets since early 2006. This young group is held together by a band of six seasoned players and performers with a total of four music degrees and a decade of touring. This allegiance of musical madmen has brought together a unique blend of every style you can shake a butt at. They have been steadily pelting nightclubs, backyards and watering holes along the west coast supporting such acts as the Aggrolites, Abstract Rude, the Real McKenzie’s and Jeru the Damaja, and continue to work hard expanding across the globe. Their first release under their very own Roof Rock Records ‘Round 1’ is a drunken journey through traditional ska, reggae, soul, and hip-hop. ‘Round 1’ has scene independent success in local record stores and online with itunes and CD baby. It earned them a reader’s choice award for best local band in San Jose’s own Metro weekly newspaper, as well as international interest with Phonocaster records out of Berlin. The European Tour is set to kick off mid October of ’07. Whiskey Avengers has vowed to stand the musical tests of time by harboring a diverse repertoire that can cater to many different audiences ranging from young to old. By Offering the simple catchy anthems of reggae, the rhythms of traditional ska, the urban edge of underground hip-hop, the intensity of punk, and authenticity of folk music they promise a few tears and a laugh before they drink you under the table. Not to mention a clever collection of covers that will keep any crowd crooning into the night. They carry an arsenal of instruments including the upright bass, guitar, keys, sax, banjo, accordion, samplers, turntables, and plenty of things to beat on. All of this will be heard on the highly anticipated ‘Round 2,’ expected to be released late ’07. In the meantime the Whiskey Avengers will strive to continue out their mission and call upon all those who wish to support musical conquest. If you offer product sponsorship, booking, management, tour support, distribution or merchandising you are all encouraged to play a part in the vision of the Whiskey Avengers. They will in turn help you and your business in any way through the power of song, which is greatly underestimated in today’s nano-second attention span society. So c’mon you Scallywags, Skankers, and Swashbucklers, hop on board before you miss the boat. Swoop a strumpet, swallow a shot and pass the duchy. Bottoms Up!

Album Review:
Many musicians in contemporary music have lost hope and faith in the music industry, the radio, and the smudged politics that play a major role in deciding what should or shouldn’t be popular to the mainstream. The Whiskey Avengers however have risen from the industry’s ashes to fight existing mediocre musical trends and to protect our rights to bask in musical freedom. Needless to say, the Avenger’s third full-length album, Dead Man Rockin’ was effortlessly triumphant in this battle against mediocrity.

No matter if you are a reggae fan longing for heart-throbbing beats and heavy bass lines or one who prefers bouncy rhythms with their harmonies enriched with positivity, The Whiskey Avengers employ it all. Furthermore, the songs demonstrate the band’s flexibility amongst musical styles such as “Me, Myself and I,” which rubs off as Irish rock while there are even glimpses of their rapping abilities in “Warrior.”

Their audacious singing voices remind me of The Aggrolites front man and lead vocalist Jesse Wagner, while even a few songs musically resemble The Aggrolites rhythmic diversity. For instance in “Run,” there is not just a single offbeat skank per measure, but two or more exist depending on the instrument. The changes in tempo and various rhythmic patterns made this album a wild ride.

“I’m a two-toned renegade spit-fire whiskey drinkin’ rudeboy son of a bitch” is the opening line in “Warrior”, the second track and personal favorite on the album. If there is one thing for certain, the Avengers surely do have adoration for whiskey. In “Till I Die,” the lyrics tell a folksy story about alcohol and are filled with one-liners about the good times that it suffices. “Days are short, nights are long, singin’ these worn out drinking songs.”

“Uncle Sam” is a political piece that successfully compares the government to a dead-beat uncle that comes into your life way too late as the Avengers put it themselves. The electric keys build up to a staggering bassline while the keyboards and muted guitar double team the skanky rhythm. The bridge and short musical intermission is incredibly memorable, given the half-minute of playback time it occupies.

It is hard to pinpoint a few good songs featured on this album. But, Dead Man Rockin’ has everything a reggae fan could ask for. The positive vibrations, an original endeavor lyrically, and plenty of instrumental variety and structuring are all reasons that this album is one of my favorite listens of 2011.

Thanks to all that came out for "Dead Man Rockin" CD release concert on October 28th at the Blank Club.

The sounds of cheers echoing, shot glasses clinking, the bartender’s bell ringing fill the hole-in-the-wall, converted row house bar as the stage lights begin to appear. The crowd quiets to the sound of shattered glass. The Whiskey Avengers have arrived.
The Whiskey Avengers bring more of the type of toe tappin, body skankin’, go the f*** wild sound to the stage than has been heard in quite some time. A ska-reggae lover’s wet dream, Dead Man Rockin’, doesn’t allow you to stand still. You’ll find yourself tapping your leg, bobbing your head or clapping your hands begging not to have to stop. Not to worry, it won’t let you. The third release from Whiskey Avengers is a true adventure from start to finish. The collective, and seasoned talent of the four members brings out sounds from ska, reggae, hip hop, and punk rock producing an album that truly does, well, rock.
The group’s core includes Stefan Meisner (vocals/guitar), Clint Westwood (vocals, bass), Lee Pardini (keys) and Kevin Higuchi (drums). The group hails from Northern California, but perhaps would feel more comfortable in a back alley bar in Boston. Regardless, songs like “Warrior” and “Misery” create massive energy with their punk rock riffs and catchy lyrics while songs like “Uncle Sam” and “Feel Anything” create a scene of a serene hidden coastline in your daydreams. Simply put, this album is fun, catchy and a proud addition to any collection. In fact, it might find its way to the top of that collection pretty quick.

LOCAL SKA BAND Whiskey Avengers aren't really a ska band anymore. On their third album, Dead Man Rockin,' they've slowed down a bit and have come into their own, producing their best, most concise record to date.

"I've been describing the new album as 'rocksteady and rock & soul.' We focused on rocksteady a lot on this album because it allows us to convey our attitude and musical integrity all in one," says singer/guitarist Stefan Meissner. Unlike most ska bands, the Whiskey Avengers' roots are firmly planted in hip-hop; it was originally a side project of two members of the rap group Language Arts Crew. They learned how to make albums from their days as rappers—they wrote, recorded and piecemealed songs together in the studio first before playing them live, often with one or two members writing all the parts. Five years later, they had evolved into the more traditional rock process of playing their songs at concerts before recording them.

What came out of that were smoother, mellower rocksteady songs. And thanks to extra time spent in the studio and the band's interest in singers like Otis Redding and Sam Cooke, their vocals (and harmonies) developed an element of soul that wasn't there before. Between recording their last album and this one, they lost their horn section. Rather than try to re-create the group that they were, they adjusted—hastening their move away from ska. "Since becoming a four-piece, the role of Lee, super keyboard boy, has become a lot more prominent. Guess he's our lead guitarist now," says bass player Clint Sobolik.

Since they spent so much time before recording the album getting the songs just right, it only made sense to spend plenty of time and money actually recording the album. They even hired a producer, Michael S. Rosen, who has produced records for AFI, Rancid, Papa Roach, Santana and more. They hope the release of Dead Man Rockin' will be the first step toward greater national success. "We're going to give it a college try this time around. If our hard work and investments pay off, we'll be gone on that open road by the spring," says Sobolik.

Presiding in the dormant pits of the San Francisco Bay Area, renegade Reggae and Rocksteady outfit the Whiskey Avengers have released their third full length album ‘Dead Man Rockin.’ Staying true to their origins of traditional Jamaican style Ska and Rocksteady mixed with West-Coast Reggae, they have seamlessly infused a new blend of Rock, Soul and Folk Americana that lends itself to multiple generations of castaways and bad apples. They have teamed up with legendary studio engineer Michael Rosen to spit shine their sound creating a seemingly unstoppable independent musical force. The album was recorded at Roofrock Japantown Studio in the bay area of northern CA.

The band previously billed their style as “dirty ska”, but with this album they’re now calling it “renegade reggae and rocksteady”. This is a slightly different focus, musically and thematically, than their earlier work. The band’s first two albums, Round 1 and Wet and Wreckless, were most memorable for high-energy, hepped-up jump-ska beats and lyrics about bad relationships and the (ahem) physical benefits of good ones.

The new album still has a couple of fast songs (“Run”, “Misery”), but mostly settles into slower, smoother, but still hard-driving grooves. There are still songs about bad relationships (“Run”, “High all night”), but there’s also a new focus on political and social events in songs like “Who are they” and “Uncle Sam”.

The slower groove shows up in songs like “Feel anything”, a pretty much straight-up reggae mover, and the already-released single “Monkey”, with its melodic chorus and horn-toned synthesizer riffs. Alongside “Monkey”, “Me, Myself, and I”, with its faster beat, reminiscent of Irish music or something from The Pogues, and its give-em-hell attitude is another standout from the album.

Overall, if you’re into ska rhythms and punk attitude, you should check out this new album.

To introduce the album, The Blank Club will host a CD release show on Friday, October 28. Over the remainder of 2011, the Whiskey Avengers will be touring the west coast from Seattle to Scottsdale, so if you want to hear this material live and local, October 28 is your best bet.