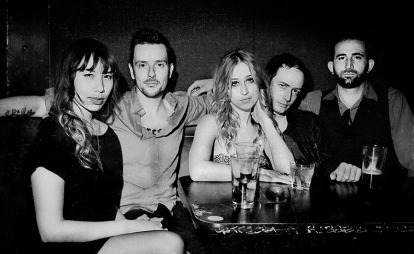 With a patchwork of influences (Siouxie and the Banshees, Echo & the Bunnyman, Sonic Youth, Led Zeppelin, New Order and My Bloody Valentine) and by fusing elements of post punk, shoe gaze and psych rock, Vela produces an ethereal and aggressive soundscape.

The band is lyrically inspired by fantasies of love, and the beauty of empowerment.

VELA is comprised of members of Delle Vellum, The Paradise Boys, The Snake the Cross and the Crown (Equal Vision), and New Diplomat (Dan the Automator).

The band started as a side project between guitarist Ian Zazueta and front woman Florie Maschmeyer. Bassist Nate Higley was quickly added to the fold, introducing Julia Johari as a second keyboard player, guitarist and background vocalist.

The four of them wrote a batch of songs and by September landed Jef Pauly as drummer.

They are currently recording their debut EP at Sharkbite Studios in Oakland, California.

VELA will be on Radio Valencia tonight at 8.40pm for an interview with Rick Abruzzo for his show Baghdad by the Bay ( http://wp.me/p7J-uc ). We will be discussing the recent recording of our EP, tomorrow's show at the Bottom of the Hill, the uncanny future and other adventurous topics! Tune in 89.7FM, or online at http://radiovalencia.fm/listen/ (computer/iPhone/Android).

Recording is a wrap! 3 days of frantic recording was great times and we are pretty excited to move on to the mixing phase. We think you'll like the result!

VELA is in the studio.

Today is day 2 of recording for VELA at Shark Bite Studio in Oakland, CA.
Back

The Bottom of the Hill

Update Required To play the media you will need to either update your browser to a recent version or update your Flash plugin.
Download
Back
You Tube