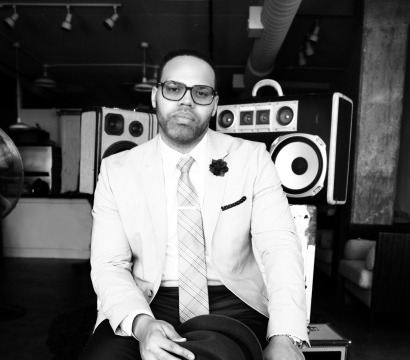 GRAMMY Award Nominee, Singer, Songwriter, and Producer Eric Roberson, continues to break boundaries as an independent artist in an industry dominated by major labels, manufactured sounds and mainstream radio. Described as the original pioneer of the independent movement in r&b/soul music, Eric has achieved major milestones in his career, from being a successful songwriter and producer for notable artists like Jill Scott, Musiq Soulchild, Dwele, Vivian Green and countless others, to releasing nine albums under his Blue Erro Soul imprint. This Rahway, NJ native and Howard University alum has been nominated in both 2010 and 2011 for a GRAMMY Award in the “Best Urban/Alternative Performance” category and continues to blaze trails unheard of from an independent artist. In 2011, his studio album, Mister Nice Guy, debuted in the top 5 on the iTunes R&B/Soul Charts. Earlier this year, Eric released a collaboration album, B-Sides, Features and Heartaches, as a thank you album to his fans. The album represents ten years of collaborations with some of his favorite independent artists in the soul movement including Angela Johnson, DJ Spinna, Collette and Les Nubians.

Eric’s 10th album, The Box, is set to release August 12, 2014 and the inspiration for this album is his determination to embrace growth, while at the same time not forgetting the person he is. Eric is a lover of fashion and loves to stay so fresh and so clean but is still a hip-hop kid at heart who likes to get down and dirty. This album definitely displays staying true to who you are, but also stepping outside The Box at times to learn, grow and mature.

The Box pays homage to the first place Eric learned to appreciate music…At home. Eric comes from a musical family and his sister’s boombox AKA The Box quickly became the family centerpiece of entertainment. At first, he began to listen and study the musical sounds he was hearing and would sit in his room and flip through record after record of musical artists from different genres: hip-hop, gospel, soul, jazz, rock and whatever else he could find in the stack of albums. Different genres of music taught Eric about musicianship, songwriting and performance. The first time he heard Commissioned, he was emotionally moved by the lyrics. Listening and watching Stevie Wonder taught Eric about musicianship and production and Tribe Called Quest made Eric instantly say to himself, “This is the way music should be” at the age of 15. To this day, Eric still loves to incorporate a combination and mash up of all of these musical flavors he heard as a child with The Box.

When asked what is Eric’s favorite song on the new album he says, “All of the songs on The Box are my favorite, but if I had to choose three, “Lust for Love” because it really sets the tone of the album. It is the nucleus, the core. It represents that Low End Theory bottom with that live, old school approach over top of it.” He continues, “The Cycle,” because it covers a subject that is relatable to many but rarely talked about. With this album i wasn't afraid to bring up things that may be uncomfortable to some people, as long as it was truthful. “The Cycle” is very much a true part of my dating history. Not to mention, one of my favorite rappers, Pharoahe Monch, did the song with me. That alone was a dream come true. “ When selecting his third favorite song, Eric says, “I love ‘Do The Same For Me’ because it was the last song we recorded on the album and the session is still very fresh on my mind and heart. For one, my father is singing on the song with me. He was singing and looking at my mom with tears in his eyes. She was crying while she watched him in the vocal booth. That experience was one of the main high points of recording this album,” Eric concludes.

Eric loves writing songs while watching movies, so a lot of times he will turn the sound off and write what he feels is being said in the film. The first single from The Box is "Mark On Me" was created in this fashion. The song was inspired by the scene from the movie “Boomerang” when Eddie Murphy realized Robin Givens had the upper hand on him. I've had experiences when I was that guy, so I decided to write about it. Over Eric’s 15 years in the music business he doesn't have many writing rituals. He has not sat in a studio with a pen and pad in over five years. With “Mark On Me”, he walked into the vocal booth with nothing written and just focused on being that character. Until he walked out of that booth, he was a guy struggling to shake a young lady who made a really strong impression on him and that process wrote the song.

Being a husband and father has inspired Eric’s music tremendously. Marriage has helped him embrace honesty. Fatherhood has helped him embrace maturity. He feels both honesty and maturity is apparent on The Box. He loves being married and being a father. “Music takes a lot of time and energy so I try not to separate them from it. My family was with me a great deal of the time while making this album. They fueled me and kept me focus.”

The Box differs from past albums because there's more live instrumentation than on any of Eric’s previous albums. With the industry becoming more and more simplified, there was no better time than the present to become more musical and take it back to the old school.

Performing on stage is something Eric thrives and lives for and if you have never seen Eric perform live, it's a jaw-dropping experience. Eric, along with the crowd and the band are all in it together having a ball. We are singing and dancing, laughing, crying, and most importantly sharing. Sure, a good part of the show is rehearsed and prepared, but a lot of it is feeding off of the crowd. “It’s a lot of improv, theatre, church, stand up, and a straight up party mixed into one,” says Eric.

“I want my music to move people” – Eric Roberson